In the late 1890’s and early 1900’s an organized group of African American men, with Henry Taylor as fire chief, constituted the Lincolnton Fire Department. In 1907, a more organized department was recognized by the Town of Lincolnton as the first organized fire department under the leadership of G.W. McAllister with 12 volunteer firefighters. The Department in 1907 shared a small building with the Police Department on Court Square where City Lunch stands today. The first recorded fire apparatus was a pump mounted on wheels which was rolled to a cistern on the court house grounds.

The Town of Lincolnton procured its first motorized fire apparatus on December 11, 1917 which was replaced on September 25, 1925 with an American LaFrance pumper nicknamed “Hully”. Hully was sold to the Shriner’s and still makes appearances in Lincolnton for special events. The Fire Department received its first aerial apparatus, a 1952, 65 foot American LaFrance ladder truck (pictured below) which remained in service until 1986. 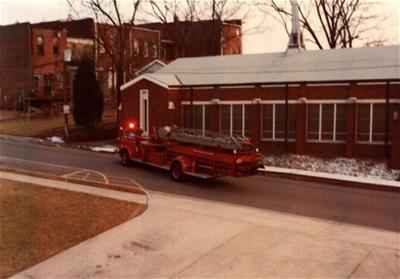 In July of 1990, after two annexations, a contract was signed with the Boger City Volunteer Fire Department to place a Lincolnton firefighter in their station Monday – Friday from 8am to 5pm. In 2010, staffing changed when two Lincolnton firefighters and LFD Engine 2 were assigned to the Boger City Volunteer Fire Department 24/7. In 2011, the two firefighters and Engine 2 moved into Lincolnton's second fire station at 142 Ross Street (pictured below).

In April of 2004, the Lincolnton Fire Department and the City of Lincolnton signed an Application for Provider Franchise with the Lincoln County Department of Emergency Medical Services to provide: Automatic External Defibrillation, Medical 1st Responder and EMT-Basic coverage inside the city limits of Lincolnton and is still providing that service today.